Convergence Analysis Shows Health Disparities can be Reduced by 2030 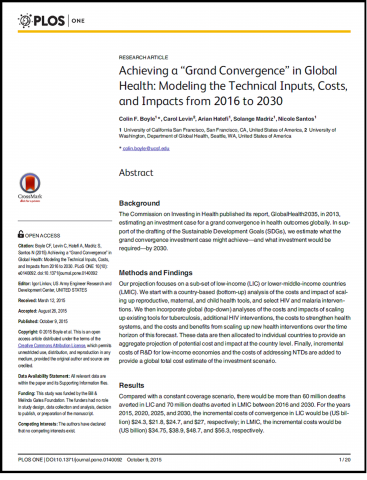 The stark disparities that exist in health today across countries and communities can be greatly reduced, creating more equal opportunities for survival and well-being everywhere, say the authors of a new study published on October 9 in PLOS ONE.

Last week, at the annual United Nations General Assembly meeting, the UN adopted a new set of Sustainable Development Goals (SDGs), which includes one goal for health (SDG 3). The health goal includes a set of targets to be achieved by 2030, such as reducing the global maternal mortality ratio by two thirds (from 210 to 70 per 100,000 live births) and reducing the child mortality rate in all countries to 25 per 1000 live births or below.

How feasible are these targets? Colin Boyle, deputy director of Global Health Sciences at University of California, San Francisco, DCP3 Senior Health Economist Carol Levin, and colleagues addressed this question in a study in which they modeled what would happen if all low-income countries (LICs) and lower-middle-income countries (LMICs) were to build strong health delivery systems and to aggressively scale up the delivery of existing medicines, vaccines, diagnostic tests, and other health tools and any new tools that will become available in the next 15 years.

“The last 15 years have seen unprecedented improvement in human health in low-income settings.  Our analysis suggests that we have just scratched the surface of what is possible,” Boyle said. “We hope that policymakers striving to achieve the SDGs will see this convergence analysis as an indication that further dramatic, rapid gains in health are both possible and affordable.”