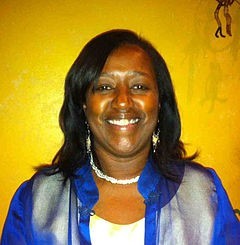 The Institute for Health Metrics and Evaluation (IHME) at the University of Washington has honored DCP3 Advisory Committee member, Dr. Agnes Binagwaho, with the Roux Prize.  This award is given to individuals who use data and evidence to demonstrate health impact.  Dr. Binagwaho is a pediatrician and has served as the Minister of Health in Rwanda since 2011.

An October 21 press release and accompanying video from IHME highlights Dr. Binagwaho's commitment to rebuilding trust in the Rwandan health system and improving health throughout the nation.  Tremendous gains have been made which are direct results of policies implemented under Dr. Binagwaho's leadership.  Below is an excerpt from the press release:

"SEATTLE — Dr. Agnes Binagwaho, a trained pediatrician and Minister of Health of Rwanda, is the second winner of the Roux Prize, a US$100,000 award for turning evidence into health impact and the largest prize of its kind. Dr. Binagwaho has been using Global Burden of Disease (GBD) data and evidence from the Ministry’s own data-gathering efforts to ensure the country’s limited resources are saving the most lives and reducing suffering. She will be presented with the Roux Prize at a ceremony in Washington, DC, on October 21.

The Roux Prize is given by the Institute for Health Metrics and Evaluation (IHME) at the University of Washington and is named for founding board member David Roux and his wife, Barbara. Launched in November 2013, it is the world’s largest award for evidence-based public health achievement and has drawn nominations from across the globe."