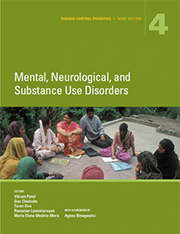 SAN FRANCISCO, California – Mental, neurological, and substance use (MNS) disorders now account for nearly 1 in 10 years of lost health globally. Despite the substantial impact these illnesses can have on the health, social, and economic wellbeing of individuals, families, and societies, MNS disorders have been widely neglected, particularly in low- and middle-income countries (LMICs). Volume 4 of Disease Control Priorities, 3rd Edition (DCP3) serves to address the inequalities in prevention and treatment of MNS disorders by governments and development agencies around the world, by providing evidence on policies and interventions that should be prioritized in resource-constrained settings. As Dr. Vikram Patel, lead volume editor and Professor at the London School of Hygiene and Tropical Medicine, explains, “the evidence on the burden of these disorders and the health and economic impacts of a range of scalable interventions to address them is compelling.  It is now the time to act to tackle what may be the most neglected group of health conditions globally.” The over 50 editors and authors have organized MNS disorders into five groups within the volume: adult mental disorders, child mental and developmental disorders, neurological disorders, alcohol and illicit drug use disorders, and suicide and self-harm.

Similar to other DCP3 volumes, Mental, Neurological, and Substance Use Disorders focuses on the need for evidence on effective and cost-effective interventions, which can be appropriately implemented across a range of population, community, and health care delivery platforms. Notes editor Dr. Dan Chisholm, Health Systems Advisor at the World Health Organization, “the volume shows that to move towards universal health coverage for persons with these disorders there is an evident need to not only substantially scale-up the availability and delivery of an essential package of care, but also provide improved levels of financial protection.” Providing a specified package of cost-effective interventions for prioritized MNS disorders is estimated to cost $3–4 US per capita per year in low- and lower-middle-income countries, and at least double that in upper-middle-income countries.

Mental, Neurological, and Substance Use Disorders is being released today at the Consortium of Universities for Global Health conference in San Francisco. It is the fourth of nine volumes in the DCP3 series, published by the World Bank Group throughout 2015-2016. This volume was developed by the Disease Control Priorities Network at the University of Washington’s Department of Global Health and funded by the Bill & Melinda Gates Foundation.