Friday, April 25, is World Malaria Day 2014.  This anniversary was instituted by WHO Member States during the World Health Assembly of 2007. It is an occasion to highlight the need for continued investment and sustained political commitment for malaria prevention and control. It is also an opportunity:

From Malaria Control to Malaria Elimination 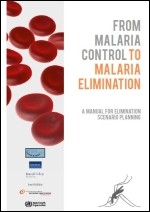 This month, WHO launched a manual for elimination scenario planning which aims to help countries most impacted by the disease move toward elimination.  Colleagues from DCP3 collaborator, University of California, San Francisco's Global Health Group contributed to the production of the manual.

Since 2000, there has been a 42% reduction in malaria mortality rates globally, and a 49% decline in the WHO African Region. This progress has led many malaria-endemic countries, even those with historically high burdens of malaria, to explore the possibility of accelerating towards elimination.

The elimination scenario planning (ESP) manual provides malaria-endemic countries with a comprehensive framework to assess different scenarios for moving towards this goal, depending on programme coverage and funding availability. It also helps countries set realistic timelines and provides essential knowledge for strategic planning in the long term.