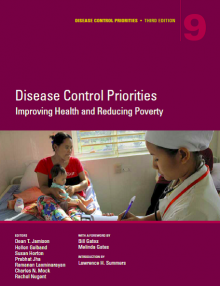 During the past 25 years, many countries have achieved significant improvements in human health and wellbeing. Huge problems persist, and terrible inequities must still be addressed to ease the suffering of the world’s poorest and most vulnerable. But that does not diminish several remarkable accomplishments: Since the early 1990s, the world has seen substantial reductions in extreme poverty; child and maternal mortality; and the incidence of deadly and debilitating diseases, such as tuberculosis, malaria, and HIV/AIDS. The incidence of polio has decreased by 99 percent, bringing the world to the verge of eradicating a major infectious disease for only the second time in history.

Credit for these and other advances in global health belongs to many institutions, governments, and individuals, including the scholars who organized and contributed to the first and second editions of Disease Control Priorities. We hope and expect this third edition also will have a large, salutary impact.

The first edition, DCP1, was published by the World Bank in 1993. It was the first comprehensive effort to systematically assess the effectiveness of interventions against the major diseases of low-income and middleincome countries. DCP1 also analyzed the relative costs of interventions, enabling policy makers and aid donors to make smarter decisions about how to allocate scarce health dollars for the greatest impact. DCP1 helped bring about dramatic shifts in how countries and the global community invest in health.

Indirectly, DCP1 also influenced our personal decision to devote much of our philanthropy to improving the health of people in poor countries. This came about because data from DCP1 was a basis for the World Bank’s 1993 World Development Report, which focused on investing in health and catalyzed our thinking about how and where we could make a difference. We were stunned to read that 11 million young children were dying every year from preventable causes such as pneumonia, diarrhea, malaria, and other infections that are rare or rarely fatal in the developed world. We were shocked by the disparities in health outcomes between rich countries and poorer ones. Every page screamed out that human life was not being valued as it should be.

In addition, our eyes were opened to the fact that most preventable deaths and disability in lower-income countries were caused not by hundreds of diseases but by relatively few, and that the costs of preventing and treating them were often low, relative to the benefits. Our shock turned to excitement. Here were points of leverage where we could work to reduce inequity and help realize a world where every person has the opportunity to live a healthy, productive life.
DCP2, published in 2006, again advanced the conversation on global health. Where DCP1 focused on the benefits and costs of interventions against individual diseases, contributors to DCP2 also considered how countries might gain greater traction by organizing their efforts around multi-purpose health platforms, ranging from village clinics and school-based health programs to district hospitals with emergency services and surgical units. DCP2 showed how investments in health platforms, especially for community-based primary care, could magnify impact despite limited budgets. Several countries, particularly India and Ethiopia, have pursued this approach with good results.
In important and useful ways, this third edition of Disease Control Priorities further widens the frame for discussion of health policies and priorities, innovatively addressing the different needs of countries at different stages in the development of their health systems. This edition maps out pathways—essential packages of related, cost-effective interventions—that countries can consider to speed their progress toward universal health coverage. DCP3 also draws attention to the catastrophically impoverishing effects that many medical procedures can have on poor families. This analysis, combined with data on the lost productivity caused by various diseases, provides insights into how investing in health, particularly in expanded access to health insurance and prepaid care, can not only save lives but also help alleviate poverty and bolster financial security.
Across the three editions, some conclusions remain constant. Childhood vaccinations, nutrition programs, access to treatment for common infections— these pay enormous returns in lives saved and suffering avoided. Family planning, maternal health programs, and gender equity benefit communities and society as a whole. Major infectious diseases can be beaten through collaborative, international efforts, as the past 25 years have shown. Overall, improving the health of the world’s most vulnerable people remains one of the best investments the global community can continue to make toward realizing a better, safer world.
Bill & Melinda Gates
Gates Foundation
Seattle, Washington