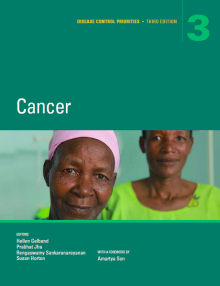 When the biopsy results confirmed that I had oral cancer, I was 18 years old. If it sounded like a death sentence, there was reason for that thought. Survival rates from cancer were very low in those days, especially in the poorer countries in the world (I was then a student in Calcutta), and statistics offered very little reason for cheer. Now, at the age of 81, I can not only celebrate the fact that I made it, with help from heavy-dose radiation, but also that the battle against cancer in the world is increasingly being won.

However, the victory is not only partial, it is also deeply uneven. With early diagnosis and effective treatment, almost two-thirds of the people who get cancer in high-income countries now survive. In low- and middle-income countries, only half of that proportion—no more than one-third—make it.

This wonderfully illuminating book tells us about the state of the battle against cancer, but it also takes on the challenge of making lives better—and longer—particularly in the poorer countries of the world. As the essays in this state-of-the-art book on cancer show, with extensive data and probing analyses, mortality and suffering from cancer can both be dramatically reduced, even in the less affluent countries, through a combination of preventive measures (of which tobacco control is the most well-known and frustratingly underused avenue), early diagnosis (distressingly low for cancers in which early detection is not difficult to achieve and would make a major difference, such as oral, cervical, and breast cancer as well as the cancers that afflict children), and of course early treatment (including well-established procedures as well as newly developed methods).

The lesson that emerges from the well-aimed empirical analyses presented in this volume is not only that a major difference can be made in the incidence, management, and elimination of cancer, even in the poorer countries of the world, but that this can be done in cost-effective and affordable ways. Understanding and determination are the deficiencies most in need of change.
This is, ultimately, a cheerful book on a very grim subject. It is also a hugely important invitation to action.
Amartya Sen
Thomas W. Lamont University Professor
Harvard University
Cambridge, Massachusetts